A teragood alternative for expiration dates?

The discussion on expiration dates (best before and use by) has been going on for many years now, mainly because of their impact on food waste. Expiration dates are hard to estimate, and moreover dependent on the circumstances in which the products are transported and preserved. Real time supervision of the quality of a food package’s content is still a somewhat far-fetched dream, but realizing this would allow a substantial reduction in food waste and therefore lead to not only an economical but also an important ecological breakthrough.

This dream is slowly starting to become real, with a new millimetric scale system that is developed within the TERAFOOD project (https://terafood.iemn.fr/). The system uses light at TeraHertz (THz) frequencies to monitor the chemical content of the headspace of a food package in real time. The advantageous properties of THz frequencies are that they can go through almost all types of packaging materials, but also strongly interact with most volatile organic compounds (VOCs) that form during food spoilage. This THz food sensor uses a so-called photoacoustic technique converting a THz signal into an easier detectable acoustical signal (sound)1.

What’s unique in this TERAFOOD project, is the scale in which the sensor can be produced. Using a Silicium-based chipscale technology not only allows for a compact technology but also for parallelized chipscale mass manufacturing which enables a reduction of costs. However, a disadvantage of this Silicium-based chip is that it can be defined as a glass particle, which is not allowed in food packaging. Although a promising technology, it will not be ready for implementation just yet.

How does the sensor work?

The TERAFOOD sensor is based on a triply resonant mechanism (patent pending) to achieve an enhancement of the measured signals. An important first step towards such an integrated sensor is the realization of a Si-waveguide to control the propagation of the light on the chip at frequencies that cover the absorption lines of typical spoilage gases (ammonia, hydrogen sulfide, ethanol).

The dimensions chosen for this waveguide confine and guide the light at frequencies between 500 GHz and 3 THz, a frequency range containing many spectral lines of these VOCs. In order to guide this light efficiently inside the silicon layer, a “suspended” beam of just a few hundredths of mm2 has been realized using advanced clean room techniques by engineers of Vmicro, a start-up company and partner in the TERAFOOD consortium.

The feat here has been to realize “floating” Si-beams of micron dimensions with a total length up to several centimeters. Moreover, Vmicro’s engineers optimized etching processes that made it possible to pattern circular holes with a diameter of a couple of hundredths of a mm inside these suspended beams (known as photonic crystals). In this way the gases that need to be detected can be efficiently captured and the guided THz light is allowed to interact strongly with the VOCs. These hole patterns have an additional role of acting as an artificial mirror trapping the light for a sufficiently long time in that part of the Si-waveguide where the gases are captured. The pictures below illustrate the scale, the dimensions and the technological processes of the fabricated test structures.

To validate that it is possible to control and guide the light inside this chip, we made a 90-degree bended channel as shown in Figure 2 below. A measured signal on the detector can only occur if the suspended Si-channel is truly guiding the THz light. However, the final sensor will obviously not include such a bend. Moreover, the THz light in the guiding structure will probably be coupled by other means than shown in Figure 1. 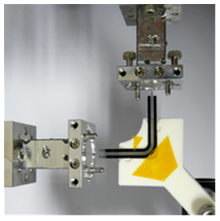 The experimental measurement setup shown here is primarily intended to provide a proof of principle demonstration that THz light can truly be confined and guided on a sub-mm integrated Si-chip. The techniques used for this demonstration are at the moment high tech lab instruments.

Figure 3 shows a typical measured output signal of the above experiment. As a function of frequency, the red and blue curves illustrate the light that is respectively reflected by and transmitted through the guide. It can be clearly seen that due to the specifically chosen dimensions of the patterned hole mirrors a THz signal close to the targeted frequency 635.5 GHz – corresponding to a strong absorption line of ethanol – is very selectively trapped and guided by the suspended Si-beam. This validates the confinement of the light at the resonance frequency corresponding to the targeted gas and the reflection of the other frequencies. 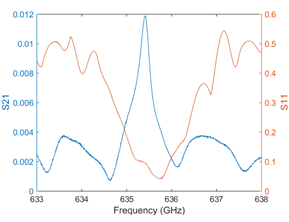 With this experiment, one essential building block of the TERAFOOD sensor has been validated. The next technological run will concentrate on combining such waveguides with gaseous environments containing small calibrated concentrations of the targeted gas. The strongly confined THz light is then expected to periodically heat this gas and actuate a membrane that covers one of the patterned holes. Measuring the movement of this membrane will then result in the detection of the trace gas.

· If you want more information on the project, do not hesitate to contact the project coordinator Mathias Vanwolleghem – *protected email*

· If you are interested to become a member of the advisory board of this project, you can contact Isabelle Sioen – *protected email*

With support of the European Regional Development Fund and the province of East-Flanders.